There is a chance that it will be a long story, because there is so much to say about it. Anyway, make an attempt to familiarize the internet user with this leisure activity via this website of “Windhondenvereniging Coursing Nienoord te Leek”. You often hear the term hazy greyhounds. This is a ‘layman’ expression that is usually used when one means a Greyhound. In the technical jargon we talk about greyhound racing and that usually means track racing. During track racing, the dogs start from a starting loft and run an oval of 280, 350 or 475 meters. The dog that crosses the finish line first is the winner. In addition, there is also coursing within the world of greyhound racing and then “Windhondenvereniging Coursing Nienoord te Leek” comes into the picture. Freely translated, coursing comes down to greyhound hunting.. 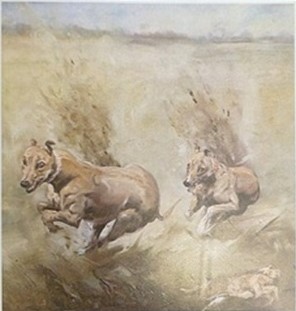 Coursing is the most authentic form of greyhound racing, created in the dog country par excellence, England. With coursing you can see how dogs, per pair, start a chase. The most realistic coursing is behind live wildlife in nature, the live coursing.

This illustration is from ‘COURSING The Pursuit of Game with Gazehounds’. Until a few years, nature was sometimes helped by catching hares that are known on the coursing terrain. These natives (hares) were caught and released on the competition day, after which 2 dogs started the chase. The origins of competitive coursing can be found at the “Waterloo cup” in England. The competition for the “Waterloo cup”, which is still held annually, has become a great tradition. If we go back in time, the “Waterloo cup” is the most traditional coursing. As now in England, coursing behind live game on the European continent is prohibited by law, which is why an alternative has been sought and found. With the help of bobbins a zigzag course is set out and with an electric motor the towed hare is pulled from the start to the end of the course.

The biggest difficulty with lure coursing (that is how a coursing with drag hare is called) is of course that the prey determines in which direction the chase goes. A zigzag trajectory is set out on a large site by means of bobbins. In addition, obstacles can also be part of the course. The great thing about coursing is that every course is different and an appeal is made to the original characteristics of the greyhound. The dog must be intelligent, agile, have power and speed, have endurance and be well built. During live coursing, that dog receives points that force the hare to change direction. During a lure coursing, the dogs are judged by the way they are running. With the Nienoord coursing, the prey forces the dogs in a different direction. The artificial hare is pulled up onto the site from the starting point. The prey gets a large lead. Then the 2 dogs are started. The first part of the coursing will therefore run in a straight line. After about 70 to 100 meters the first bobbin is ready. Next there are zigzag sections with obstacles and again longer sections at the end. Because we hardly have any natural obstacles, in the “Nienoord” course, obstacles are made of camouflage nets. With the “Nienoord” course, the starting point remains that we want to make a comparison with the “Waterloo Cup” as much as possible. The dogs receive points for the way in which they follow prey from a number of judges, who together form the jury. The dog with the most points is the winner.

The red and white colors have traditionally been linked to coursing. When coursing, the dogs walk with a weather deck or vest in the coursing colors: red and white. These colors are meant for the judges to distinguish the dogs well from each other, furthermore the dogs run with a muzzle. The muzzles protect the dogs against mutual aggression, which is hardly ever the case.

Coursing from a dog’s perspective

Coursing is where, as a dog, you can freely determine your own course and undoubtedly come into contact with the primal feeling of ancestors who were able to hunt in this way in the country of origin at the time.

Always put the safety of your dog first

Nowadays, coursings are also offered by non-greyhound owners. These courses are generally held on small fields and the layout of the course does not differ much from a race track. Furthermore, due to the small course, the turns and distances are not adjusted to the speed of greyhounds. To prevent injuries and disappointments, we advise you to first inform for which breeds and under which conditions such coursing is held

Finally, we would like to invite readers to watch everything live, for example on Pentecost Day, the last but one weekend in August, both in Leek or our season-end Autumn course on Ronostrand in Een. Not only Afghan hounds will be present, but also Whippets, Salukis, Barsoi, Irish Wolfhounds, Podenco Ibicenco, Italian greyhounds, Deerhounds, Azawakhs, Galgo Español, Chart Polski, Magyar Agár and possibly other greyhound breeds. Look under Activities for the exact dates.